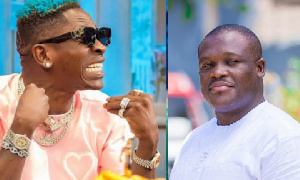 Dancehall musician Shatta Wale has sent out a strong warning to Sam Nartey George, MP, Ningo Prampram, that if he [Sam George] does not stop talking about him, he will be sick for years unless he [Shatta Wale] touches him.

According to the ‘I know my level’ hitmaker, he has never seen a foolish man like the MP before and wondered if he was a government official or a radio presenter.

Shatta Wale, known in real life as, Charles Nii Armah Mensah, has been in the news lately after a video of him kissing one of his male lieutenants Shatta Kumojie went viral.

Sam George, who was reacting to the video on his verified Twitter page said the musician has smoked the wrong leaves.

Responding to the legislator in a series of tweets on his verified timeline, the self-acclaimed dancehall king indicated that he [Sam George] should prove to him the type of leaves he smoked.

He, then, described Samuel Nartey George as a foolish man making foolish comments.

“That Sam George if you don’t stop those foolish comments about me erh…You go sick for room for years unless I touch you .. I never see foolish man like you too before .. prove to me which leave I smoke, you are very foolish a man.

“Ah is Sam George even a government person or he is a radio presenter .. Masa this year if you be minister and u come to me anyhow, I will also come to you anyhow !! What da fuck !!!! If Ibe so u guys want us to run the country, we go go like that .. tackle tackle ,,,foolish man,” part of his tweets read.

Shatta Wale believes that people like the NDC MP, who is leading a campaign against LGBTQ+, have been behaving like big men yet when they open their mouth to speak, they “talk like a fool.”

He disclosed that he is aware of all the plots the MP and his associates are planning against him.

Wale, then, challenged the MP to do his worse.

“The plot ppl like Sam George has for me we know all .. Bigman bigman but you talk like a fool .. Do your worse foolish man!! No wonder Ghana is not moving forward …Myopic Leader …You disrespect me, I will disrespect you 10billion times…Sam George is you am talking to…

“Am tired of this country with all this hate on just a musician, From nobody’s, somebody’s, to media to politicians, I never hurt nor plan to wrong anybody, I only want to see the youths uplift their minds and succeed in life . You guys are very wicked ..it’s a shame…

“Sam George this ting u started on the internet make sure it stays on the internet,, cuz the leaves you bought for me here will burn you yourself ..Foolish man!!!!

“To tell you the truth …Koko kwraaaaa …do your worse …mchewww… Nobody be nobody en boy boy for here .. Boys deh suffer for street, that’s what you sam george need to be talking about !!! Attacking me is a mistake,” Shatta Wale stressed. 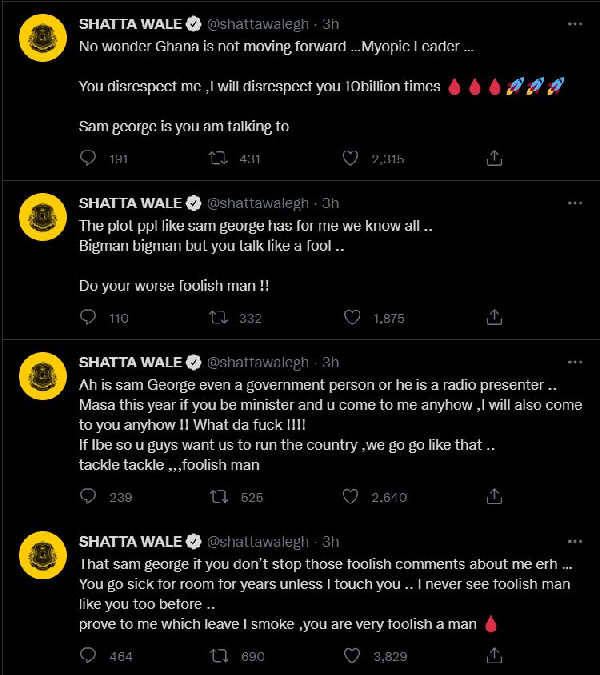 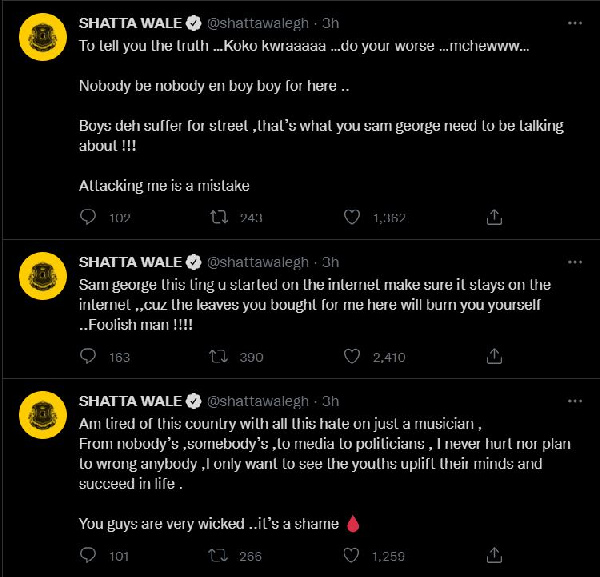