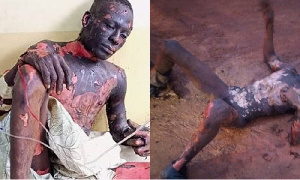 The young thief who was later identified to be 32-year-old Eric Kofi Quaye, almost lost his life in the exercise after he touched the wrong wire to cut it off to go and sell.

Eric Kofi Quaye got seriously electrocuted and his clothing also caught fire as he suffered the electrocution causing him to burn beyond recognition but still alive.

Fortunately for him, his tampering led to a blackout that released him from the grip of the electricity after suffering a great deal.

Eric Quaye has been admitted to the Ketu North Government Hospital and is receiving intensive care while the Aflao police have officially notified him of his arrest while receiving treatment.