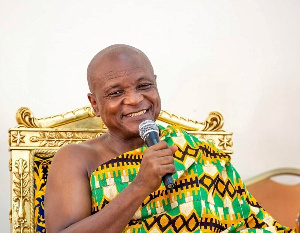 Paul Adom-Otchere, the host of Good Evening Ghana, GEG, has responded to Togbe Afede’s claim that he is a ‘stomach journalist’ and does his work to please his paymasters.

According to him, people have constantly described him as a ‘stomach journalist’ just because of his support for President Nana Addo Dankwa Akufo-Addo and the governing NPP.

He said, he has tried very hard to ignore such narratives, especially from people who disagree with him on social media but since a respected Agbogbomefia of the Asogli State and President of Asogli Traditional Area has also joined in making such claims, he will address it.

Adom-Otchere noted that after Akufo-Addo had lost the 2008 elections, he stated on his bi-weekly show on Metro TV that “Ghanaians had voted wrongly [for Prof Mills]”.

He said, two years after making such a statement, he met the then late President and he told him [Adom-Otchere] that “Paul I’m going to prove to you that Ghanaians did not vote wrongly”.

“Everyone has known my support for Akufo-Addo for a long time. The reason why I supported him [at the time] was that I observed him in Parliament and I thought that among his generation, he was going to be a great leader and I still stand by that position.

“In 2012, he [Akufo-Addo] lost the elections again and then again, I supported him…when John Mahama was President, I lobbied to be on the NCA board – it was going to hit a wall, even when the President wanted it, his people didn’t want it because they said I am Nana Akufo-Addo person…

“When you say ‘stomach journalist’ what does it mean; I am acting on the conviction that Nana Akufo-Addo is a great President among his generation for Ghana. You can think differently, no problem about that…but allow me to think that Akufo-Addo is the best.

“My thinking of Akufo-Addo as the best is not new, it dates back to the period when he was losing elections; so, those young people [including Togbe Afede XIV] who don’t know the history and thought I just jumped on some Akufo-Addo bandwagon because he is in power; I have supported Nana Addo forever….” Paul Adom-Otchere explained.

Paul Adom-Otchere stressed that, if such a statement was not coming from Togbe Afede XIV, Agbogbomefia of the Asogli State and President of Asogli Traditional Area, he would not have spent time on his show on Thursday, June 09, 2022, to address it.

The traditional ruler stated that the claims are untrue.

He explained that during his time as a Coucil of State member, he was ‘one of the active participants’ in the Council’s meetings.

“He [Adom-Otchere] knew me very well. [So it’s] surprising that he of all people, and I don’t want to go into details; will be the one to criticise me. But why am I not surprised? Because he had done something similar before. When I was fighting Agyapa, he granted an interview to the Minister of Finance and sought to denigrate me even in that interview.

“By suggesting that I was an employee of Ken-Ofori Atta. When I drew his attention, he apologised that no, no, he knew I was a founder of Data Bank. I said, so why then do you present it as if I was an employee of Ken Ofori-Atta? Again, when we were having a debate about the referendum, that had to be aborted, he again tried to criticise me” Togbe Afede XIV explained to Joy News.

The Agbogbomefia of the Asogli State, President of Asogli Traditional Area further intimated that, “It’s a surprise that he of all people. When I say he of all people, he’ll know why I’m saying I didn’t expect that from he of all people. But unfortunately, some people live by their stomachs in the kind of things that they do. So given my recent experience, I’ll say I’m not too surprised.”

Tags ADOM AFEDE ARE BEING ilogical Otchere to TOGBE you