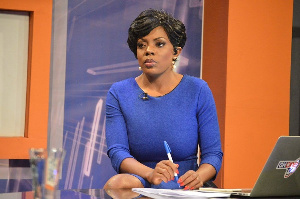 Broadcaster Nana Aba Anamoah has described as ‘senseless’ foot soldiers who are vehemently defending Sir John’s Will in which he allegedly gave part of the Achimota Forest lands to his relatives.

On the back of the brouhaha surrounding the Achimota Forest lands, a screenshot of page 5 of the Last Will of Kwadwo Owusu Afriyie aka Sir John, who until his demise was the Chief Executive Officer (CEO) of the Forestry Commission, went viral on Sunday, May 22, 2022.

It showed that Sir John together with one Charles Owusu had already secured parts of the Achimota Forests with three different lands distributed to some family members of the deceased.

Some foot soldiers of the ruling New Patriotic Party (NPP) have attempted to rise and defend the Will, engendering controversy on various social media platforms.

Reacting to the development, Nana Aba Anamoah was puzzled over the incessant quest to mount a spirited defence for the Will. According to her, whoever defends the Will is a pillock.

“The worst part is the foot soldiers defending the will. Mo nim nyansa baako sei,” she tweeted.

Meanwhile, the Ministry of Lands and Natural Resources has said it is investigating the matter.

A statement issued on May 22, 2022, said: “The Ministry takes a very serious view of the allegations, and has requested for all documents relating to the lands in question, as part of an initial inquiry to ascertain the veracity of the claims. Considering that the issues that form the basis of the allegations predate the tenure of the current Minister, Hon. Samuel A. Jinapor, MP, it is important that he is seized with the full facts to enable him take appropriate action, if, indeed, there is any merit in the claims.

“The Ministry assures the general public and the good people of Ghana that it will ensure that the national interest is protected at all times, especially in matters pertaining to the Achimota Forest.”

There was a news report suggesting that the Government had gazetted an Executive Instrument (E.I.) to approve the redesignation, sale or development of Achimota Forest.

A document from the Ministry of Lands and Natural Resources, making reference to an E.I., stated that the Achimota Forest Reserve is to no longer be regarded as a forest reserve.

He explained further that the government is returning to its custodial owners, identified as the Owoo family because the land was not being used for its intended purpose, which included the extension of the Achimota School.

Previous CK Akonnor’s son picks Ghana over Germany
Next VIDEO: My success is due to hard work, not luck — Black Sherif responds to Blakk Rasta