Home / ENTERTAINMENT / VIDEO: My success is due to hard work, not luck — Black Sherif responds to Blakk Rasta 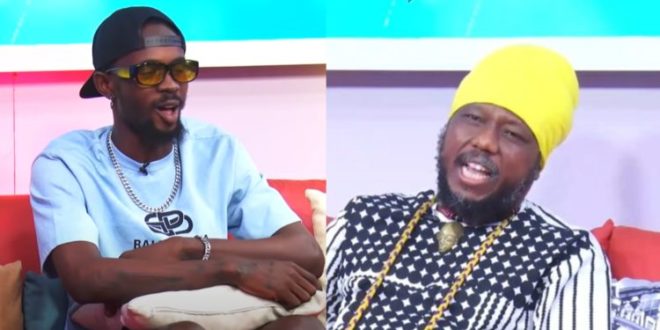 VIDEO: My success is due to hard work, not luck — Black Sherif responds to Blakk Rasta

2022 EAA Entertainment Personality of the Year, Black Sherif, disagrees with critics who see his rise in the music industry as a fluke.

Responding to a recent statement made by reggae musician and broadcaster, Blakk Rasta, who attributed the success of his global hit single, ‘Kwaku the Traveller’ to luck, ‘Blacko’ dismissed the assertion, and insisted that he rather deserves credit for his hard work and dedication.

Black Sherif also admitted that he used to listen to Blakk Rasta’s music when he was young, adding that his father likes Blakk Rasta.

“When his ‘Barack Obama’ song became a hit (in 2008), my father had just returned from Greece, we often listened to it at home.”

Black Sherif, who was a guest on Citi TV‘s Upside-Down show, also acknowledged the support he received from some individuals when he started his music career 3 years ago.

According to the 21-year-old, comedian, Ajeezay was the one who first invited him to Accra while he was doing music in his hometown, Konongo.

Kwaku the Traveller has recorded over 75 million streams in its first month of release. The song, produced by Joker Nharnah, peaked at Number 1 in both Ghana and Nigeria on the Apple Music Chart.

In the same month, Shazam announced that the song was the most searched song on the app.

Previous You’re senseless – Nana Aba Anamoah to defenders of Sir John’s ‘Achimota Forest Will’
Next One dead, 5 arrested in renewed disturbances at Kandiga-Doba