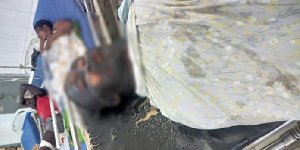 Police in the Western Region have arrested three people said to have launched a violent attack on a Bolt driver and setting him ablaze in the process.

The three, who are Senior High School students are said to have confessed to committing the crime, it is reported.

The suspects would be put before a court accordingly, police say.

Spokesperson at the Western Regional Police Command, DSP Olivia Adiku said: “At about 5pm on December 24, our team from the Regional Intelligence and Operation Unit, based on some intelligence, conducted an operation and arrested three suspects namely Patrick Baidoo, aged 18, Joseph Lord Nii Adjei Odiku, 17, and Adolf Eshun, aged 17 years. All these three are [SHS] students. They were arrested in connection with the Bolt driver who was severely burnt on December 22, 2021″.

“Unfortunately, the Bolt driver has passed on. The suspects confessed that they wanted to steal the car from him. When they got to Baka-Ano, and they asked him to hand over the keys, he refused, hence they poured the petrol on him and burnt him. The three are currently in our custody and would be put before court on the charges of robbery and murder“, DSP Olivia Adiku further mentioned.

The Bolt driver who later died at the 37 military hospital has been identified as Naval officer AB1 Boateng Okyere.

DSP Adiku further told Citi News the police won’t make public the names of the schools of the suspects due to security reasons. They could face the court on counts of robbery and murder, the police said.

It appears ride hailing app drivers are now targeted in what appears to be a new wave of violent crimes in parts of Ghana.

In July, a bolt driver was killed at Feyiase, near Kumasi, triggering a serious manhunt for the attackers.

Rashid Ibrahim, 32, was arrested on Sunday after the decapitated body of the late Israel Agyei Manu was discovered at Feyiase new site.

According to the police, he told investigators he acted on assurances of some people he consulted to bring a human head for money ritual. The suspect is facing the court for murder.

Previous Keagborekuzi I, the Nigerian man who became the world’s youngest monarch at age two
Next No violent crimes recorded during Yuletide