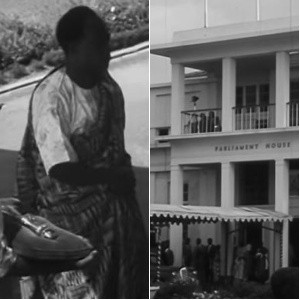 GhanaWeb chanced on an old video that shows when Ghana’s Parliament House was first opened in 1960.

This was during the presidency of Osagyefo Dr. Kwame Nkrumah, Ghana’s first president.

Dressed in rich Kente and other cloths, the men and women in the video take their seats inside the building ahead of the official start of the ceremony.

That building, as GhanaWeb noticed, is the one that presently houses the Office of the Speaker of Parliament.

Also in the shot was a statue of Kwame Nkrumah, even as many other guests and citizens sat in the sheds prepared for the ceremony.

A military parade, drumming and dancing, display of other rich cultures, and the presence of foreign diplomats also characterized the event.