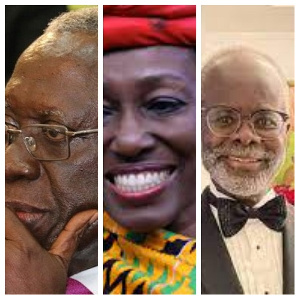 6 politicians who should quit politics and focus on other things

“The true measure of a man is not what he dreams, but what he aspires to be; a dream is nothing without action. Whether one fails or succeeds is irrelevant; all that matters is that there was motion in his life. That alone affects the world”. These words of American writer Mike Norton encapsulates what life is all about.

It’s one thing having a dream and it is another thing working towards that dream. The dream could be in the areas of politics, sports, economics, entertainment etc but what is most important is putting life into these dreams by acting towards them.

That you have lofty dreams or working towards them does not necessarily mean you are going to achieve them. As the writer rightly put it “whether one fails or succeeds is irrelevant; all that matters is that there was motion in his life. In other words, the most important thing is that you tried to actualize your dreams.

In Ghana’s political dispensation, there abound stories of people who burst onto the scene with lofty ambitions of being MPs, Presidents or Ministers.

They put action into their dreams but are unable to reach their goals due to a myriad of reasons. Some of these persons, at some point, resign to fate and focus on other things; others, however, cling to their hopes and are unable to let go.

GhanaWeb, today brings you six politicians who need to call it quit on politics and channel their resources and energy somewhere else.

At some point, it felt like Dr Paa Kwesi Nduom was going to be the one to break the NPP-NDC duopoly.

From 2004 when he became the Member of Parliament for Komenda-Edina-Eguafo-Abirem on the ticket of the CPP, his popularity soared with ministerial roles under the Kufuor government.

Paa Kwesi Nduom gave the CPP some credibility and at some point felt like he was going to lead them to presidential glory but that did not happen in the 2008 election.

Then, he crossed the carpet to the Progressive People’s Party, forming his own party in 2012. He still maintained some credibility but nothing happened in the 2012 and 2016 elections.

Things however took a nosedive in 2018 when his financial institutions, GN Bank and Gold Coast Securities were clamped down in the financial sector crisis.

Nduom appears not to have recovered from there. In the last two elections, his PPP has been represented by a different candidate.

Perhaps it is time he took a bow from politics.

The former Member of Parliament for Offinso North has been involved in the 2000, 2004 and 2008 elections but has not been able to achieve his dream of winning the flagbearer slot of the NPP.

He has declared interest in contesting the 2024 elections but credible pollsters like Ben Ephson believes Ghana has a better chance of winning the 2024 World Cup than Dr Kofi Konadu Apraku winning the presidential slot of the NPP.

He should consider retiring from active politics and channelling his economic and political expertise somewhere.

From 1996 to 2022, the venerable Yaw Osafo-Maafo has gone from Member of Parliament for Offinso North to Senior Presidential Advisor.

He has basically occupied almost every major position in Ghana’s politics except the presidency which he tried and failed in 2008.

At age 80, maybe it is time the former Senior Minister, Youth and Sports Minister, and Finance Minister hung his political boots and assume the role of statesman that he justifiably deserves.

When late Professor Mills passed on, there was a prediction that Koku Anyidoho was going to face difficulties as he was not on good terms with John Dramani Mahama (refer to Manasseh’s book, The Fourth John).

He however managed to work his way into the party and became the Deputy General Secretary of the party. He was enjoying his role until he contested Asiedu Nketia in 2018.

Anyidoho claimed to have been backstabbed by his former boss and that birthed a new rivalry that saw him go at the NDC, Asiedu Nketia and John Mahama whenever the opportunity avails itself.

The continued attack on the party and some of its elements cost him his membership in 2021 though he still contests it.

Koku Anyidoho was clutching onto Mills’ legacy with the Atta Mills Foundation but the NDC beat him to it with the establishment of John Evans Atta Mills (JEAM) Memorial Heritage.

As succinctly put by Paul Adom-Otchere, the NDC beat Koku Anyidoho by using persons of persons of calibre.

Koku lost Atta Mills, lost his position and NDC and now lost the legacy of Mills. Maybe it’s time he moves on from politics.

In Kwamena Ahwoi’s ‘Working with Rawlings’ book, there is a hint that Nana Konadu Agyemang Rawlings was not happy his late husband Jerry John Rawlings picked Mills over her for the 2000 elections.

If that claim was untrue, then Konadu Rawlings’ contest with Mills in the 2012 NDC presidential primaries gives an indication of her presidential ambitions.

Nana Konadu has eyed the presidency title and it is among a plethora of reasons she divorced from the NDC and set up the People’s Democratic Party.

Nothing significant has come out from that so far.

Her daughter, Zanetor Agyemang Rawlings who represents the people of Korle Klottey in Parliament is seen as one of the few females in Ghana politics who could become the first to lead one of the two major political parties to an election.

It is therefore imperative that Nana Konadu considers retiring and plays a background role to push her daughter’s ambitions.

‘Ye maame ooo, yieee’, Akua Donkor is an interesting character, isn’t she? For many people who believe that political position should not be the preserve of the literate, Akua Donkor’s arrival onto the scene was refreshing.

She was supposed to be that person who gave a voice to the unlettered in the Ghanaian society.

She has however turned out to be a comic political character whose views are treated with a pinch of salt.

The Ghana Freedom Party founder should perhaps throw in the towel and give up on any ambition she had.

Tags 6 POLITICIANS POLITICS quit SHOULD WHO