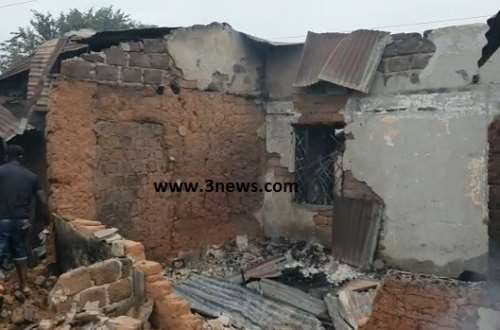 Scores of people are currently displaced at Abuakwa Maakro in the Atwima Nwabiagya Municipality of the Ashanti Region after a fire swept through their houses.

Eight shops were also not spared by the Thursday night’s inferno.

Read More Here: 44 villages in Drobo State support the Anti-LGBTQI+ Bill, warns MP not to vote against it

The real cause of fire is not immediately known although an eyewitness told 3news.com it started from a near-by shop.

“We saw a blaze from one of the shops and it was spreading very fast,” Owura told 3news.com.

Fire was still burning in one of the affected shops as at 5:30am Friday, barely 8 hours after the fire.

A distraught shop owner was seen counting her losses.

She said she recently stocked her shop with rice and oil ahead of the Christmas holidays.

Victims have blamed the Nkawie Fire Station for not acting swiftly.

“We called Nkawie Fire Service, but they arrived with a faulty pump,” another victim said.

“We then called Komfo Anokye fire station but by the time they arrived, all our properties were already gone,” he added in tears.

“We’ve lost members because of your report,” Lighthouse sues ‘The Fourth Estate’