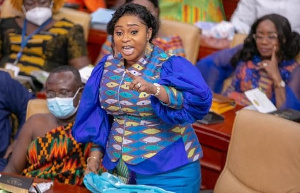 From the flurry of allegations by her colleagues on the majority side of Parliament to her referral to the Privileges Committee of Parliament, Sarah Adwoa Safo, the Member of Parliament for Dome-Kwabenya has maintained a deafening silence.

Her resolve not to speak on the raging issues, however, appears to have been broken following a comment she made in reaction to a statement by a Facebook user.

Sarah Adwoa Safo was compelled to speak to the issues after the user with the name ‘Domprehba Kwame’ implicitly accused her of behaving as if she is ‘bigger than the New Patriotic Party’.

Domprehba’s comment reads “You can stay in the USA forever. The NPP is bigger than any individual”.

Of the gust of comments under her Easter post, Adwoa Safo singled out Domprehba’s comment for reaction, commending him for his activism for the NPP.

Adwoa Safo also subscribed to Domprehba’s post that the NPP is indeed ‘bigger than any individual’ but urged him to hasten slowly in his judgement.

Adwoa Safo explained that she has a ‘social contract’ with the people of Dome Kwabenya and will in due time return to serve their interest in Parliament.

“I truly admire your zeal for our dear party. Been following your exploits on Facebook. Keep up the good work.”

“Indeed the NPP is bigger than any individual but again, it is these individuals who make up the party. Let us learn to know before we pass judgement.”

“I won’t stay in the USA forever. I have a social contract with the good people of Dome-Kwabenya which I consider sacrosanct. In good time, I will be back to continue the good work we have done in the constituency and ably represent their interest and aspiration in the august House of Parliament”, she shared.

As earlier stated, Adwoa Safo and two other MP on the majority side have been referred to the Privileges Committee for not missing fifteen sitting days of Parliament.

On April 5, 2022, Alban Bagbin, the Speaker of Parliament, ordered the aforementioned committee to probe the alleged absenteeism of Adwoa Safo, Kennedy Agyapong of Assin Central, and Henry Quartey of Ayawaso Central.

The Speaker’s direction has however been challenged by the Muntaka Mubarak who is the Chief Whip of the Minority caucus.

Previous VIDEO: Majid Michel arrested
Next Have Rihanna and her ‘baby daddy’ Asap Rocky split up?