Home / ENTERTAINMENT / Have Rihanna and her ‘baby daddy’ Asap Rocky split up? 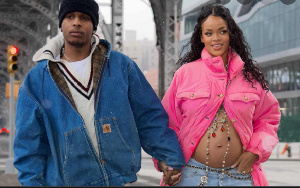 Have Rihanna and her ‘baby daddy’ Asap Rocky split up?

It appears all is not well in the camp of Rihanna and the father of her child, Asap Rocky, as the two have reportedly broken up.

The news which is currently in circulation on social media was first announced by popular international fashion blogger, LOUIS_via_ROMA.

It was contained in a series of tweets shared by the blogger that ASAP was in an amorous relationship with Amina Muaddi, Rihanna’s business partner.

Amina was reportedly in charge of designing Rihanna’s Fenty’s footwear brand and even shared pictures of her baby bump recently on social media.

“Rihanna & ASAP Rocky have split. Rihanna broke up with him after she caught him cheating with shoe designer Amina Muaddi. ASAP & Amina is not new though as she was seeing him years ago and also collaborated with him on a collection of shoes. Amina was responsible for designing Fenty’s footwear offering and Rihanna is often seen in custom shoes from her own label.” LOUIS_via_ROMA shared on Twitter on April 14, 2022.

However, the couple has not made any official comment on their relationship status.

Who is Amina Muaddi

Amina is a celebrity shoe designer and she was brought up in Italy. At the moment, she is residing in Paris.

In the past, she has worked with many A-listers from Hollywood such as Kendall Jenner, Hailey Bieber, and more.

The entrepreneur has been featured in Vogue many times.

She recently did a collaboration with Rihanna’s Fenty and the fashion experts appreciated her for the big move as well.

Tags AND baby DADDY HAVE HER RIHANNA split UP