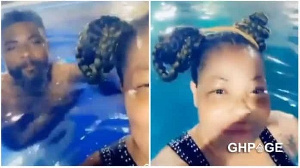 Agradaa fires husband for abandoning her after becoming a Christian

Agradaa is known to have engaged in fetishism for a long time while married to her Pastor Husband, Mr.Eric Oduro Koranteng.

Few months after her conversion, Agradaa has been seen preaching and holding the fort at the church just as her husband was doing before her conversion.

One cannot explain what exactly happened but it was rumoured that the man has left Agradaa for unknown reasons.

For some social media users, they were of the belief that the pastor left Agradaa because of her behaviour as she has been seen insulting people who ‘offend’ her on social media.

But reacting to rumours that the man has left her, Agradaa who expressed disappointment in her husband said her man should have come out to tell people that he was still married to her but failed to do so.

She also questioned why their marriage was good when she was a fetish priestess but the man is suddenly nowhere to be found after she converted.

Meanwhile, Agradaa revealed that she bought the church for her husband, not with the intention that one day, she will stop doing fetishism and go and do church business, but rather to support the man.

Agradaa who is not happy that her husband has abandoned her and followed his spiritual father said her husband should not come back when the church grows bigger and better.

According to her, when God blesses her and she moves into a bigger church and her husband returns, she will ‘pull a knife’.

Tags A abandoning after agradaa becoming CHRISTIAN fires FOR HER husband