Home / ENTERTAINMENT / Businessman claims ownership of Medikal’s mansion; drags him, others to court 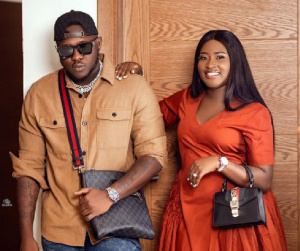 Businessman claims ownership of Medikal’s mansion; drags him, others to court

A Ghanaian businessman by the name Bobby Yawson has dragged Hiplife musician Medikal and others to court over his newly built mansion at East Legon hills, Santeo.

Somewhere last year, the Musician and his wife had a party to officially open their new 4-bedroom luxury apartment located at East Legon Hills.

But in a rather bizarre twist, a businessman who gave his name as Bobby Yawson has narrated to Blogger, Attractive Mustapha, known in real life as Mustapha Nii Okai Inusah, that he is the original owner of the house being occupied by the “Omo Ada” hitmaker and his wife Fela Makafui.

Bobby Yawson explained that he bought two separate lands from the Sinare family which includes the one that is currently being occupied by Medikal.

He claims to have started building on the land but traveled abroad for a while which slowed the project for some time.

Bobby Yawson further explained that a concerned neighbour called to inform him while he was out of the country that someone had broken part of his uncompleted house and that the person is rebuilding his own plan on his land.

According to him, he returned from abroad and reported the issue to the Greater Accra Regional Police and by the time they finished investigating the issue in six months, Medikal had completed the house.

“Information I picked revealed that one Rahim whose mother is part of the Sinare family gave my uncompleted house to Medikal,” he added.

Currently, the issue is in Court. “The issue is at the land court two, I trust the police system so I do not intend to use my own means.”

As to the reliefs he is currently expecting the court to grant, he said they are two different plots with the same family so he wants a hundred thousand Ghana Cedis compensation because Medikal has already completed the house and occupied it while the other land that has not yet been occupied must be returned to him.

Previous A battle of social media queens: Efia Odo vs Bhadie Kelly [VIDEO]
Next Did Mzbel mock Afia Schwarzenegger in this video?