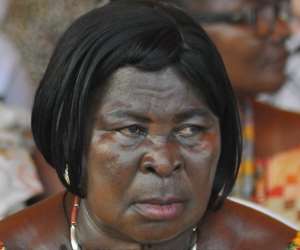 Call Kenyasi No.1 chief to order for demolishing police station I built — Akua Donkor to Asantehene

The 2020 flagbearer for the Ghana Freedom Party, Madam Akua Donkor has appealed to Asantehene Otumfour Osei Tutu II to call the Chief of Kenyasi No1, Nana Osei Kofi to order for allegedly demolishing a police station she built for the residents of Mmim Kenyasi No1.

According to the Ghana Freedom Party leader, she was attacked by armed robbers when she visited the town some time ago.

She said the situation in the area compelled many townsfolk to petition her to do something about the persistent robbery cases in the area.

Speaking to the correspondent in an interview, she said she got a proposal from the District Police Commander to build a police station in the area to help combat crime which she obliged.

Akua Donkor indicated that she was taken aback when she heard that the chief had allegedly contracted machomen to pull down the project over the claim that the land belongs to him.

According to her, she was thrown out of Goaso Circuit Court by the judge after she summoned the Kenyase No 1 chief Nana Osei Kofi to justify his actions.

“The chief hardly respects me, I have every document proving that the land belongs to me as he is aware, but he unlawfully demolished the police station I constructed for the police officers to combat crime in the areas.

“I suspect that the chief is behind the criminalities going on in the neighbourhood,” she intimated.

She added, “The judge didn’t listen to my case at all as I was thrown out of his office and was pronounced guilty.”

Asked about her next line of action, she stressed her resolve to petition the Chief Justice to have the judge at the Goaso Circuit Court removed for alleged misconduct.

“I am also humbly appealing to Asantehene to bring the chief to book over his alleged actions,” she emphasised.

Previous Government interfered with my work – Kwasi Nyantakyi
Next Woman, 33, Jailed 7yrs for Stealing a Child at Boadua