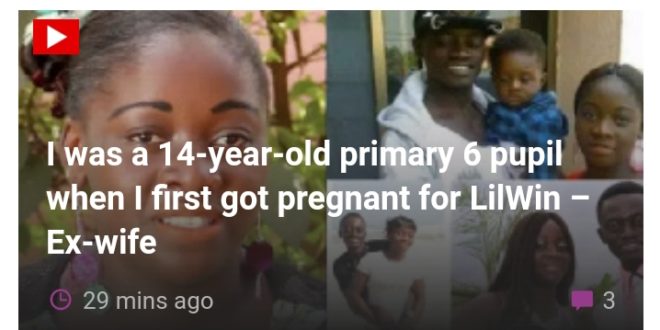 More revelations keep pouring in from LilWin’s ex-wife, Patricia Afriyie, as she has alleged that her first pregnancy occurred when she was only 14-years old.

According to Ms. Afriyie, she met LilWin who was then an underground actor and a shoe seller at a time she was just a primary 6 student.

LilWin’s ex-wife who has been vocal in the media space following the actor’s recent engagement said she had a miscarriage at age 14 and had two kids shortly after.

“I was 14 years when LilWin and I started being intimate. He met me when I was 14 and we started dating. I was a class 6 student. I was in school till JHS 3 when I became pregnant. I was pregnant with my first child at that time. Prior to that I got pregnant at age 14 and had a miscarriage. I gave birth to our first born at the age of 15. Then seven months later I got pregnant with the second born,” she stated in an interview with Oheneba Media monitored by GhanaWeb.

Highlighting the struggles they went through during that period, LilWin’s ex-wife said she met him during his ‘poverty-stricken’ days yet persevered through life with him.

Patricia said although she was discouraged by many people from dating him, she (Patricia) paid no heed to such talks.

“We’ve been through a lot of hurdles since I met him. There were times we had to soak and drink gari before going to bed. People even tried to advise me against him. They tried to stop me from dating him but I had hope that things will get better. I met him when he was an upcoming actor and a shoe seller.”

Ms. Patricia Afriyie made these statements on the same platform, where which she alleged that Kumawood actress, Sandra Ababio was the cause of their split.

Source: www.ghanaweb.com
14 6 A Ex-Wife FIRST FOR GOT I LILWIN OLD pregnant PRIMARY PUPIL WAS when YEAR 2022-05-26
Elvis Anokye
Share