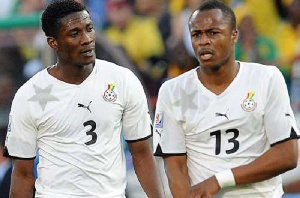 Former Black Stars captain, Asamoah Gyan has opened up on his relationship with his successor, Andre Dede Ayew.

There has been the notion that there is a feud between the two players and that that has crippled their relationship from being warm.

Addressing the supposed feud, Gyan said he cannot tell what Dede thinks about him and vice versa.

“In life, you don’t know people’s minds, I might talk to you right now but I might not like you but I have to talk to you,” he said as quoted by ghanasoccernet.com.

He added that he does not have any problem with the current Black Stars skipper but hammered that he cannot tell what Andre holds about him.

“I see what is in front of me, I don’t see what is behind me. For me what I see in Andre, I don’t have any problem, but behind I don’t know (what he thinks of me),” he added.

The Black Stars’ all-time top scorer described what he see in Andre Ayew.

“Behind he doesn’t know what I also have in mind. But from what I see, he is a positive guy, who knows his job, who is very passionate about his job, who laughs, and who motivates people. That is the Andre I know,” he concluded.

The Asamoah Gyan and Andre Ayew’s supposed bad blood goes down to how the former was stripped of the captaincy for his assistant to take over.

The transition of Ayew taking over the armband duties reportedly did not sit down well with Gyan and his camp.

Former Black Stars coach, James Kwesi Appiah, prior to the 2019 Africa Cup of Nations in Egypt handed over the captaincy to Andre while Gyan was with the team.

There is the narrative that ‘desperate’ Andre’s dream of continuing his father, Abedi Pele’s legacy of becoming the Black Stars captain influenced the manager’s decision.

Tags don't HE How I me OF think thinks