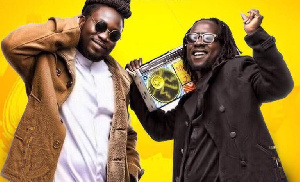 Guru has talked about the amount he lost after he invested in Wutah.

In his latest interview with Abeiku Santana which was monitored by Zionfelix.net, Guru revealed he lost $120,000.

Guru stated that one of the members of the Wutah group rose against the early agreement of 50-50 when things were getting better.

According to him, this person said he deserves just 20 per cent as an investor and those who were backing him were not okay with that.

Guru further disclosed that Wutah’s first video after he signed them cost $65,000.

Location and the car used for the video shoot also incurred some charges.

Guru clarified that this amount was physical cash.

Watch his revelation in the video below.