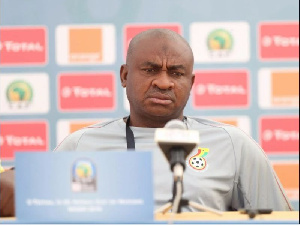 King Faisal are second on the GPL table

King Faisal beat Kotoko to go top of the table

Grusah and his manager have clashed on the club’s target for the season. Whiles the former aim for the ultimate, the latter has a respectable position in sight.

King Faisal climbed to the top of the table with a 3-2 win over city rivals Asante Kotoko last weekend.

Speaking after the win, coach Nurudeen said “It means that we are on course but it is just too early to say anything. But we believe that if we continue working hard at least we will get a respectable position on the league table. Not necessarily to take the cup because we are not ready for AFRICA.”

Contrary to the coach’s comment, the club owner had already emphasised that the target is to win the league.

When asked about what Nurudeen said at the post match, Grusah insisted on winning the league.

“I told you that our coach’s idea is different my idea is different. I’m the one bringing him up(to the lame light) and not the other way round…When we go to Africa with him as a coach, it will be a promotion for him. If he doesn’t like it, he shouldn’t tell people, I beg him. We want to win the league. I have told TV3 that the in the league ‘Nobody is Nobody’.” he told Juliet Bawuah on TV3

Faisal are tired at the top with Kotoko on 13 points each after six games in the just started season.

Source: www.ghanaweb.com
Related Topics:AMBITIONGrusah
Up Next