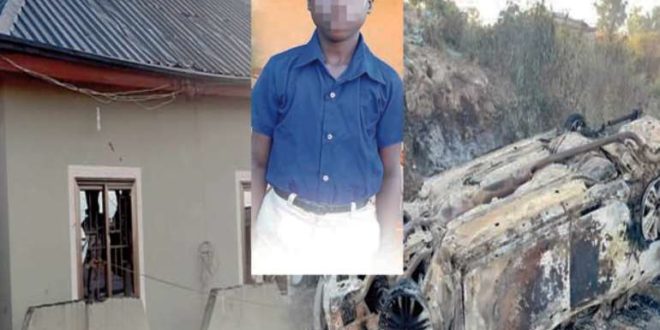 Mayhem at Amanase as 4 Fetish Priests arrested amidst gunshots 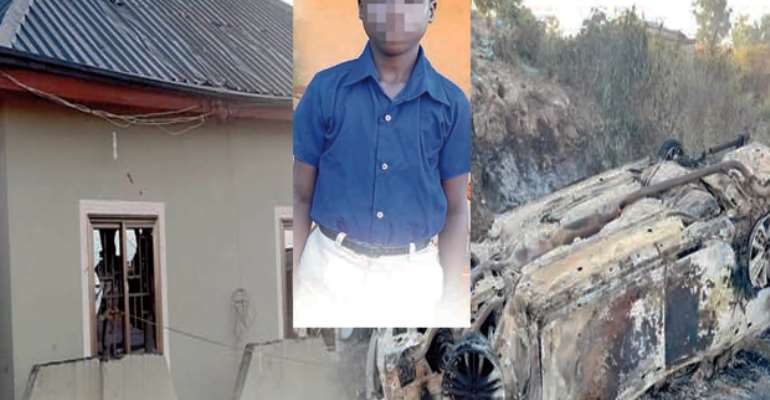 Four fetish priests, including the couple whose activities allegedly enthralled two teenagers to kill an 11-year-old boy, purposely for money rituals, have been attacked by irate youth at Amanase near Suhum in the Eastern Region.

The violence was so intense that it took the intervention of the police from three police districts in the region to rescue the priests and send them into police custody.

They ended up burning a car, belonging to one of the fetish priests, into ashes.

Matters escalated when the youth stormed the palace of the Gyaasehene of Amanase, to demand instant justice for shrine owner Solomon Adjorolo aka ‘Wazenga’ whose wife, Charity Mensah, was recently arrested as part of the Kasoa teenagers killing of an 11-year-old boy’s probe.

According to the irate youth, Wazenga or Rasta who is an ex-convict and his wife, were said to have masterminded the kidnapping of a boy the residents claimed they were going to kill for rituals.

The report said on Monday, May 10 at about 17:00, the Coaltar District Police Commander received a distress call from Nana Agyekum, Gyaasehene of Amanase, to report that he had in his custody at his palace, a suspect believed to be part of criminals indulging in rituals that he needed police assistance to escort him to the police station.

“Police quickly moved to the location and met three other arrested persons, all suspected ritualists, but the teeming crowd at the palace did not allow police to take them out as they vowed to take instance justice on them,” the police report said, adding “reinforcement was called from Suhum and Kibi where the Suhum Police Commander, the Kibi Divisional Crime Officer and Coaltar District Commander were in attendance, yet police could not march the angry crowd.”

The report said “the irate mob had set fire on a car belonging to one of the suspects, and started pelting police with stones, resulting in damage to a side window glass of service vehicle No. GP 2867 of Kibi Police Divisional Patrol.”

According to the police report, “some of the stones hit the Suhum Police Commander as well as the Kibi Divisional Crime Officer,” adding “eventually, police had to resort to firing shots into the air to scare the mob before the suspects could be rescued and evacuated to Suhum Police Station for investigation.”

DAILY GUIDE gathered that the whole melee started when a certain man identified as Richard Narh, now at large, from Afienya, allegedly contacted Charity Mensah, wife of the fetish priest, for money rituals a few days ago.

He was reportedly told to bring human parts and some cash and as a result, he pretended to be a drunkard and went to Amanase on Sunday evening in search of the supposed human parts.

The man then entered a funeral ground and allegedly attempted to lure a ten-year-old boy to take alcohol, which they claimed had been laced with tramadol.

He then tried to convince the boy to take the drink to enable him to do the kidnapping.

Some soldiers who were at the funeral noticed the actions of the man and questioned him.

He then confessed to the soldiers what he was seeking to do, but as the interrogation was going on, he escaped and left behind his mobile phone and two identity cards (Ghana card and a voters ID).

The father of the boy, identified as Richard, kept the mobile phone and later called a number which happened to be the man’s wife, who revealed the husband’s identity.

The father then reported the matter to the Amanase Regent who is also the Gyaasehene.

In the process, Charity Mensah, who was recently arrested and granted bail over the Kasoa boys’ incident, called the mobile phone which was still in the custody of the boy’s father on Monday morning, thinking she was talking to the runaway suspect.

According to the father of the boy, the fetish priestess said on the phone that, “Young man, won’t you bring the things for the rituals again. If you don’t bring them by the close of today (Monday) don’t set your feet in my shrine again!”

Charity Mensah’s call was said to be on loud speaker so the Gyaasehene also heard what the fetish priestess reportedly said, and they realised the shrine is still into such activities for which the police raided the place recently.

According to DAILY GUIDE checks, the Gyaasehene quickly summoned the fetish priest (Wazenga) to his palace but he showed up later on Monday evening.

News about the attempted kidnapping of the boy spread like wild fire on Monday, so when the fetish priest entered the palace, the youth amassed at the place.

The Gyaasehene then informed the youth that he had invited the police to come and arrest the fetish priest.

The impatient mob started chanting and swearing and threatened to burn the fetish priest alive.

While the maneuverings were going on, another gang of fetish priests, about four in number, stormed the palace in an attempt to rescue Wazenga, but the mob attacked them and some managed to run away.

They left behind one Toyota Camry, which the angry mob led by some women, poured petrol on it after smashing the screens with stones, and set it on fire.

However, one of the fetish priests identified at ‘Zewuze’ managed to escape into a nearby bush after scaling the Gyaasehene’s fenced wall and was given a hot chase by the youth but he managed to escape.

The police from Suhum and Ayensuano quickly rushed to the palace to rescue the fetish priest and his gang, but the youth prevented the police from entering the palace and as a result, another batch of police officers had to be brought from Kyebi in Abuakwa South.

The police had to fire into the air to disperse the mob before gaining access into the palace.

The youth then descended on the Suhum Police Commander’s car and smashed it with stones.

The angry youth said ever since the wife of the fetish priest was linked to the Kasoa ritual murder, they have been monitoring movements at the shrine and warned that the police will face their wrath if they release the suspects.

Last month, armed police officers from the CID Headquarters in Accra raided the shrine and arrested Charity Mensah, a fetish priestess, who was nursing a two-week-old baby, and one Desmond Nii Adjei, following claims by the Kasoa teenage ‘killers’ that they had contacted the shrine to enable them to become billionaires, and the fetish priest and priestess allegedly told them to bring human parts and blood for rituals.

The fetish priest’s supposed direction given to Felix Nyarko, aka Yaw Anane, and Nicholas Kwame Kini, aged 16 and 17, according to the teenagers, compelled them to kill 11-year-old Ishmael Mensah Abdallah for money rituals.

The ten single-room apartments, which also serve as the shrine, are located in an isolated area on an untarred road at Hwanabenya, at Amanase.

The inscription “Every Problem That’s On You Will End – Good Heart” alongside a heart symbol is prominent on the façade of the pink building.

The unfenced structure with an open compound also bore the images of spiritualists.

Another two-bedroom apartment with similar images of bizarre figures bore the inscription “Be Bold – Try and See!”

All the rooms had broken doors and signs of animal rearing at the place.

Two other burglar-proof rooms stood apart from the others, and these were where the gods were said to be kept.

DAILY GUIDE gathered that the fetish priest and his wife lived with only four young men, believed to be assisting them in their activities. They reportedly fled before the police stormed the house.