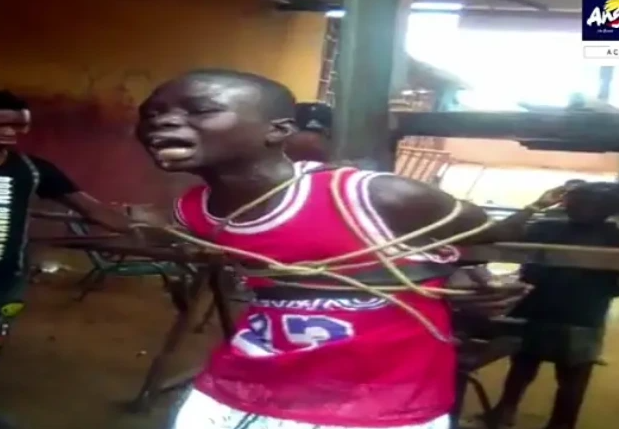 Mob justice is when a person suspected to be a criminal is beaten by a group of people or crowd with clubs, stones, machetes, or anything they can lay their hands on. In some cases the alleged criminal dies in the process due to excessive beating or they are set on fire using old car tires and fuel.

A young man who is about 18years old has been tied on a metal and electrocuted for allegedly stealing Gh¢20 which he denied to have committed that crime.

Despite, the boy crying and pleading on his innocence of the crime inflicted on him, a warder who didn’t believe him and wanting to know the truth tied him to a metal wall which was electrocuted.

This news was broadcasted by Kwadwo Dickson on Angel TV, who believes the act inflicted on this innocent boy was very bad and terrible.

Kwadwo Dickson therefore hinted that, those involved in the act mounted on this boy be arrested immediately.

Tags AND boy ELECTROCUTED MEET THE tied WAS WHO

Previous CCTV footage of 23-year-old woman murdered by friend pops up
Next VIDEO: Abukari Damba reveals why there aren’t many African goalkeepers in major European leagues