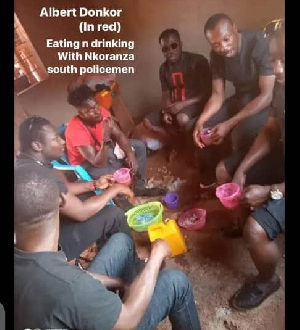 Nkoranza saga: Men in viral picture with deceased not our officers – Police

The Police Service has dismissed claims suggesting that some men seen in a picture with the deceased suspect in Nkoranza circulating on social media are personnel of the service.

The claims have gained ground on social media with some Ghanaians raising questions over the late Albert Donkor’s association with the Police in the district.

A statement sighted by StarrFM.com.gh Wednesday night said: “The Police Administration wishes to state categorically that those men seen in the picture are not Police officers from Nkoranza South or any part of the country.

“Our investigations have revealed that this is a picture of Albert Donkor and his five friends, none of whom is a Police officer, which was taken at a funeral at Boana in the Nkoranza North District which is approximately 20 kilometres away from Nkoranza”.

The statement further said: “We consider this as a calculated attempt by the people behind this mischief to drug the name of  Ghana Police into disrepute”.

Previous Lack of access to loans; reason for low women empowerment in agribusiness – Zanetor
Next Leaving an abusive relationship is a gradual process – Actress