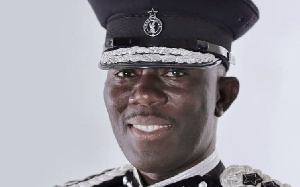 No one is above the law – IGP tells media

The Inspector-General of Police, Dr George Akuffo Dampare, has impressed on media associations to outline to their members the mandate of the police service including effecting arrests.

According to a report by Graphic Online, the IGP at a meeting with members of the Ghana Journalists Association on Friday stated the police by its mandate is empowered to effect arrests and time especially when a person refuses an invitation to assist in the investigation.

“He said no one is above the law and, therefore, the laws must be made to work in the country,” the report by Graphic said.

Discussing with the media representatives how they complement the work of the police, Dr Dampare entreated media institutions to condemn unprofessional acts that hinge on criminality.

According to the IGP by keeping silent on such matters, persons who engage in such conduct will be emboldened.

Emphasizing the need for media professionalism, the IGP said responsibility is bestowed on journalists to verify the information before putting it out.

“He also suggested that education on criminality be intensified, media practitioners should be held accountable for their actions and supporters of media practitioners who contravened the law must also be condemned since it breeds irresponsibility,” Graphic reported.

Tags ABOVE IGP IS law MEDIA NO ONE tells THE