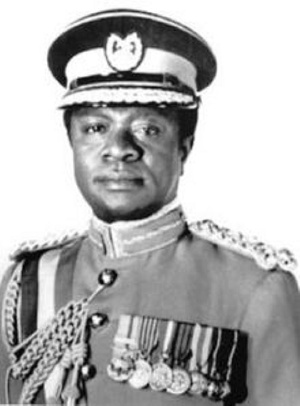 Of the many things that were popular during the tenure of General Ignatius Kutu Acheampong in the 1970s, the recollection of the term ‘fawoto begye Golf’ can never be overlooked.

With many attributions and interpretations given to this term, GhanaWeb has chanced on excerpts of a book that provides a better depiction and reasoning behind this infamous term.

In the book, “General Acheampong: The Life and Times of Ghana’s Head of State,” fawoto begye Golf is explained in detail.

The book highlights, among other things, the personality of General Acheampong and how he became unpopular among his detractors, as well as some of the charges that were slapped on him during the secret trial that led to his execution.

An excerpt from the book explained that the name, fawoto begye Golf, became common on people’s lips around the time because of how generously General Acheampong dealt with, especially women, during his presidency.

“Well-known for his kind-heartedness and open-handedness, Acheampong was easily vulnerable to the public perception and allegations. He was known to find it difficult to turn down legitimate requests, which likely led to his abuse of the chit system his government introduced to regulate the distribution of consumer goods. His authorization of the chits was known to be indiscriminate and mostly to women who dominated the retail trade. These enterprising women showed off their new wealth by buying cars, especially the locally assembled VW Golf. However, critics propagated that Acheampong purchased the vehicles for them.

“Acheampong’s relations with women became one big issue during his time in office. In fact, his detractors rebranded the VW cars women drove as Fawoto begye (“bring your behinds for it”), which was to say the women traded sex for the cars,” it stated.

The narration continued that with Acheampong’s generosity widely felt by both men and women, it became easy bait for his detractors to accuse him at his unorthodox trial.

“Not surprisingly but rather facetiously, womanizing was one of the charges thrown at him by prosecutors at his secret and unorthodox trial that resulted in his execution in the end.

“However, as Major Antwi Bosiako and others insist, General Acheampong was just too kind to people, irrespective of sex or gender. ‘Once anybody gained access to him and demanded a chit for importation, whether male or female, he did not turn his back on the person.’ Seemingly, his detractors closed their eyes to favours Acheampong equally extended to men.

“Many of Acheampong’s contemporaries believed that his fondness for women was hugely exaggerated and twisted by critics, perhaps for humour or comic relief. And, as Colonel Adade Takyi argues, even if there was some truth in the assertions that he loved women, it would have been practically impossible for him to have slept with the hundreds of women that appeared before him for such assistance. Discussing the issue of womanizing seemed to even irritate Major Rose Asaase, who for many years served as Acheampong’s secretary. According to her, he only empowered women to go into business.

“He granted them access to loans, and it was on record that some army personnel wives secured some loans. And did you ever hear he went after any military general’s wife?”

See excerpts of the book below: 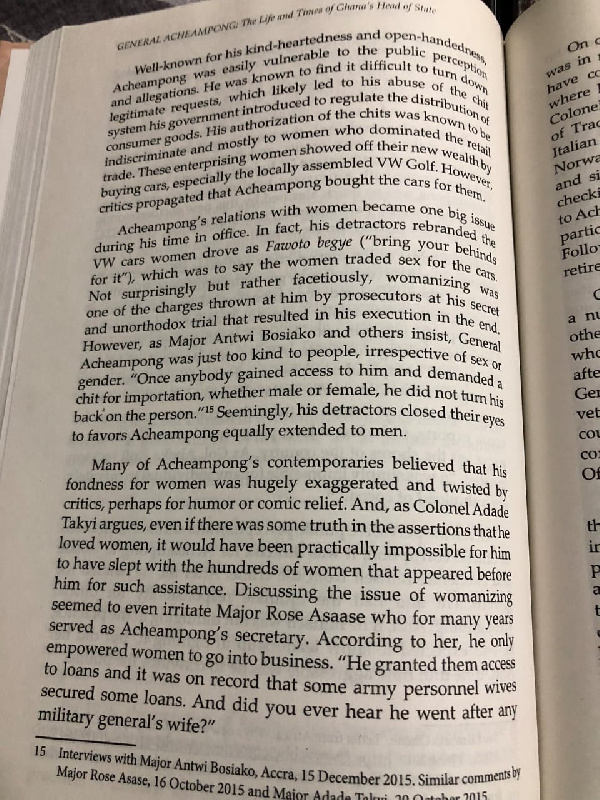