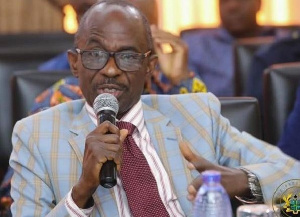 General Secretary of the National Democratic Congress (NDC), Johnson Asiedu Nketia, has alleged that a Member of Parliament on the ticket of the New Patriotic Party has been struck down by stroke.

According to him, this has made the unnamed MP unable to discharge his parliamentary duties effectively.

In an interview on the Starr Chat programme with Nana Aba Anamoah, the chief scribe of the NDC indicated that the said MP was receiving treatment at the Intensive Care Unit (ICU) of an unnamed hospital.

He made this comment while criticizing the governing party over how it has handled the Sarah Adwoa Safo absenteeism situation.

Asiedu Nketia indicated that even if the party succeeds in getting the estranged MP back into Parliament, it will be difficult to get its full numerical strength considering the allegations that one of its MPs was down by stroke.

He maintained that even if the NPP succeeded in having the Assin Central MP removed from Parliament, the NPP “cannot win the game of numbers in this situation”.

He urged the government to strife to build consensus and collaboration Parliament.

“If you are faced with a situation where the objective reality suggests that you must operate like a coalition government, you learn the tools and use them.

“You don’t just go and keep dreaming that I can get what I want when I was controlling parliament. It is simply not possible and not feasible.

“So the problem is with the attitude of the government and its functionaries. The earlier they learnt the situation has changed the better it will be for all of us because now, in this game of numbers they think that they can win it through a very expensive exercise.

“One is to try to force some of our MPs out of parliament and take their seat. they have tried this with the Assin whatever MP…it hasn’t solved any problem.

“The matter is in court and now you have one of your MPs struck down by stroke. He is in intensive care so even if this Assin MP is kicked out, you are back to square one,” Asiedu Nketia said.

Sarah Adwoa Safo has in recent times become very topical as a result of her absence from Parliament.

Two NPP MPs, Kennedy Agyapong and Michael Okyere Baafi claim that she is holding the party to ransom.

According to them, she is blackmailing the party to be made Deputy Majority Leader.

Kennedy Agyapong in particular has described her as a ‘failure in life’ for making such alleged demands.

Meanwhile North Tongu MP, Samuel Okudzeto Ablakwa has revealed that Adwoa Safo is not the only culprit in absenteeism.

He cited Kennedy Agyapong and Henry Quartey as having also been absent beyond the 15-sitting threshold.

Per Article 97 (1)(c) of the 1992 Constitution, an MP shall vacate their seat if he/she is absent, without the permission in writing of the Speaker and is unable to offer a reasonable explanation to the Parliamentary Committee on Privileges from fifteen sittings of a meeting of Parliament during any period that Parliament has been summoned to meet and continues to meet.