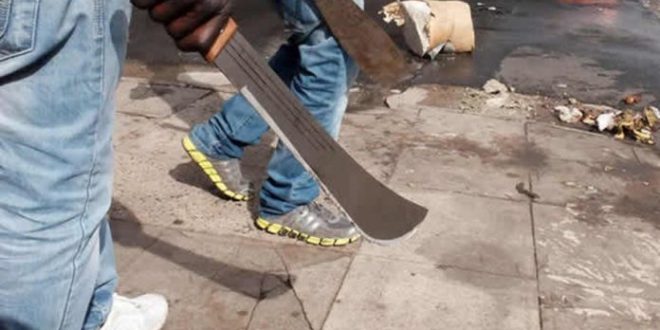 Violence breaks out in Nima

Rival gangs hack each other in a bloody fight

The Ghana Police Service has mapped out some causes of the gang violence that erupted on the streets of Nima in Accra on Tuesday, January 19, 2022.

According to the police, the main reason for the bloody clash between the rival gangs was the quest for supremacy in Nima and its environs.

“Looking at the causes of yesterday’s violence, it is their quest for supremacy,” ACP Kwesi Ofori, the Director of Public Affairs for the Police Service told the media during a briefing on Wednesday night.

Earlier on Tuesday, the police had stated that the violence was a result of a long-standing feud between two ringleaders identified as Kumordzi alias Ibrahim Hussein and Bombom alias Ali Awudu.

Giving more background to the feud between the gang leaders at the press conference, ACP Kwesi Ofori further stated that the tendency for the rival gangs to have territorial control as well as bully and intimidate the others is what cumulated into the events of Tuesday afternoon.

“Their quest to lord over each other, their quest to make sure that they intimidate their opponents. And there have been occasions that they had a lot of fights at the local level without coming to light. Their activities have been closely monitored by the Nima Police over the last two years.

“They were hauled to the Municipal Security Council and dealt with, and warned accordingly. They also came to the Nima Police two years ago and they were bonded till yesterday that they exhibited mass violence,” ACP Kwesi Ofori stated.

Bloody clash on the streets of Nima by rival gangs

Violence erupted on the streets of Nima and its environs in Accra on Tuesday, January 18, 2022.

The incident that had machete-wielding young men take over the streets in a battle, saw the firing of several gunshots and took the timely intervention of the police to avert an escalation of the already bloody situation.

Speaking at a press conference later in the evening, the Director of Public Affairs for the Police Service, ACP Kwesi Ofori, connected the genesis of the bloody conflict to a long-standing contention between two known gangsters in the neighbourhood.

“It is led by one Kumordzi alias Ibrahim Hussein and Baboon alias Awudu; they are rivalry groups that never agreed on issues and today they went all-out on the open streets of Nima,” ACP Kwesi Ofori describing the incident as gangsterism and mass violence stated.

He disclosed that seven persons have been arrested in connection with the violence with police in pursuit of other suspects.

“The intervention force (police) had to manage the situation carefully. They’ve managed to stabilize the situation. Seven people have been arrested; five are currently present here with us, and the other two are on admission under police guard. That suggests that they are under arrest. Again, we are pursuing the criminals in and around Nima and its environs to make sure that we get them arrested to enable them to face justice,” he said.

The Director of Public Affairs of the Ghana Police Service emphasized that the police will go all-out to fight crime and assured the residents of Nima and its environs of their commitment to protecting lives and properties.

Videos of the events of Tuesday afternoon started spreading on social media following the outbreak of violence. The police service, in an immediate announcement via its social media pages, stated that it had been able to bring the situation under control.

From several of the videos shared on social media, some of the youth wielding machetes and other weapons could be seen chasing after their rivals and hacking some in the process.

There were gunshots heard in the video with screams and shouts of panic by residents running to seek safety.

Speaking at the press conference, ACP Kwesi Ofori informed the media that a victim identified as Appiah, who was shot during the incident, is responding to treatment at the 37 Military Hospital.

He assured of further updates from the police administration on the incident and the ensuing investigation to bring the perpetrators to book.