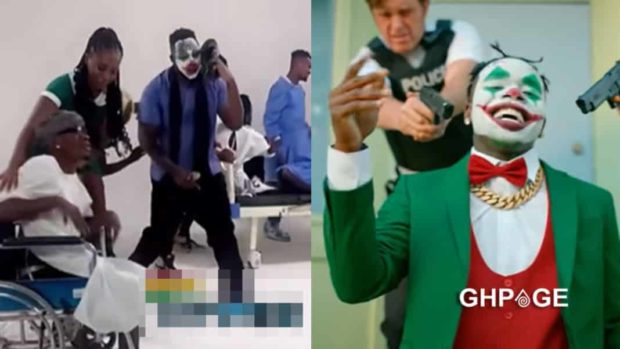 Dancehall artiste Shatta Wale and rapper Medikal have been exposed for literally adopting a video concept of American singer’s Lil Wayne and DaBaby’s for the visuals of their new song ‘Stubborn Academy’.

A critical analysis of both videos shows that the two have the same idea and storyline with almost similar scenes.

The original concept of the video titled ‘Lonely’ opens with scenes of patients being cured of their mental challenges in a psychiatric hospital.

In the case of Lil Wayne and DaBaby, it is understood that they felt lonely for not seeing their girlfriends and so they were plunged into a state of mental instability.

However, in the case of Shatta Wale and Medikal’s ‘Stubborn Academy’, the concept of their visuals is not very clear.

At least, from the snippet of the full video that has surfaced, the concept of the Ghanaian musicians are yet to be established.

Check out the short clip below

The video has stoked massive reactions on social media with many people trolling Shatta Wale and Medikal.

Read some comments gathered below

g4_pablo: Is this song really worthy of a video investment

original_school_fees: They should have used class room and small kid and Stuborn kids like school living

Previous Video of Sandra Ankobiah flaunting her highly ‘inflated’ backside causes stir online
Next Something is not right! – Ghanaians react after UTV announces John Dumelo as next host of United Showbiz