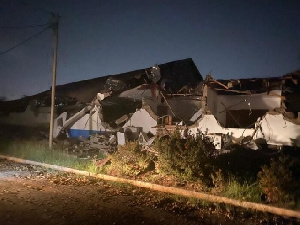 The sorry state of the Trade Fair centre redevelopment project has left some residents and their Member of Parliament (MP) in the La-Dadekotopon Constituency of the Greater Accra Region seething with anger over the manner the project has been abandoned by the government.

According to the MP, since the Trade Fair centre was razed by the governing New Patriotic Party for redevelopment into an international trade fair centre some years ago, nothing has been seen by the people.

Madam Rita Odoley Sowah explained that the way and manner the once vibrant Trade Fair centre which served as offices for the respected Association of Ghana Industries (AGI) and a source of income for residents around the centre has been left to grow weeds.

She said the centre is now gathering dust and has become a den for all manner of miscreants as well as a breeding ground for snakes and other dangerous reptiles in the area.

The MP expressed her people’s concerns about how the project has been abandoned on the Ghana Yensom morning show on Accra 100.5 FM on Wednesday, February 16, 2022.

She said her people are crying about the state of the project adding that if the project has been discontinued, the site should be restored to its former state.

She served notice that if nothing was done about the state of the project, the people of La will advise themselves.

Meanwhile, the government of Ghana in razing the centre says it had budgeted $2billion for the redevelopment of the Ghana International Trade Fair Centre.

The project was anticipated to take about three to five years and is expected to be carried out in three phases with phase one expected to include the development of a 12,000-seater trade convention centre.

Modern hotels, retail shops, among others are expected to be built on the site.