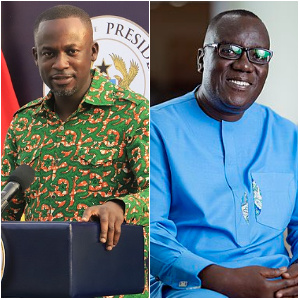 In a tweet on December 9, 2014, then-candidate Nana Addo Dankwa Akufo-Addo, said, “We do not own the land; we hold it in trust for generations yet unborn. #OneGhana #AliuMemorialLecture.”

And then at a much later date, he told his appointees: “My message to any of you, or anybody for that matter who wishes to serve in an Akufo-Addo government is this: if you want to make money, then forget it. We don’t need you and we don’t want you.”

And like many other assurances that politicians have given to citizens but have either lived below them, or have completely thrown to the dogs, doing exactly or even worse forms of the things they preached, appointees of the Akufo-Addo government have been cited to go contrary to what their leader preached.

GhanaWeb has put together two times two politicians shook the nation with their acquired wealth.

And for more perspective, these two are both members of the ruling New Patriotic Party (NPP), led by President Akufo-Addo.

The Director of Communications at the Presidency, Eugene Arhin, came into the news for all the bad reasons in early 2021 when a divorce suit from his ex-wife, Gloria Assan Arhin, came to the public light.

In the said suit also, Gloria Arhin, who said she and her husband married in 2012, listed various properties they acquired together as a couple and prayed that the court grants her ownership of portions of the properties she listed.

She also wanted the court to declare her a joint owner in equal share with the respondent in all properties acquired in the course of their marriage.

The details of that writ got many across the country spell-bound and in utter shock as many wondered how it was that Eugene Arhin was able to acquire so much properties in such a short time.

See below the divorce suit filed by Gloria Assan Arhin, which also includes the listed properties of the Director of Communications at the Presidency:

As the country was coming to terms with the various controversies surrounding the sale, privatization, declassification or not of the Achimota Forest lands, it emerged that some members of the governing New Patriotic Party, NPP, had already acquired some portions of the forest lands.

This was even before the government returned the peripherals of the forest to its custodial owners, identified as the Owoo family.

Page 5 of the Last Will and testament of Kwadwo Owusu Afriyie (Sir John) available to GhanaWeb shows that the late CEO of the Forestry Commission, together with one Charles Owusu, had already secured parts of the Achimota Forest lands.

Sir John in his will wrote that he owns 0.987 acres of the Achimota Forest land and he gives his portion to his nephews. He also handed other portions of land at the same location to other people.

“I give my portion of the land that I jointly own at the Achimota Forest in the name of DML Limited to Elizabeth Asare Boateng who at the time of making this Will, is domiciled in the USA, forever,” portions of Sir John’s will read.

Immediately after copies of Sir John’s last Will was made public, the Ministry of Lands and Natural Resources, in a statement indicated that it has requested all documents relating to the Achimota lands, as part of an initial inquiry to ascertain the veracity of the claims which are contained in the will of Sir John.

“Considering that the issues that form the basis of the allegations predate the tenure of the current Minister, Hon. Samuel A. Jinapor, MP, it is important that he is seized with the full facts to enable him to take appropriate action, if, indeed, there is any merit in the claims.

“The Ministry assures the general public and the good people of Ghana that it will ensure that the national interest is protected at all times, especially in matters pertaining to the Achimota Forest,” the statement signed by the PR Unit of the ministry concluded.