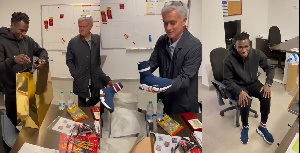 One of the heart-warming stories of the 2021/2022 football season was the purchase of a pair of trainers by a coach for one of the young players in his team.

The said coach bought the sneakers for the 18-year-old striker who had just scored his first brace for the club in the Italian league.

The coach was Jose Mourinho, the player was Felix Afena-Gyan and the club they both represent is AS Roma.

Jose Mourinho showed an inspirational and awe-inspiring moment when he bought the sneakers for Afena-Gyan in November 2021.

Speaking in a recent interview, Mourinho said Afena-Gyan was being mocked by his teammates for wearing fake pair of shoes to training.

As a coach who had interest in the development of the Ghanaian teenager, Mourinho said he bought the sneakers to encourage and motivate Afena-Gyan.

“He was there and didn’t have a contract. He was coming all the time with fake trainers and all the guys were having fun. The moment he scored, I said Felix, it’s time for these guys to stop bullying you so let’s buy a proper pair of issues,” he said.

Jose Mourinho also indicated his delight with the progress Felix Afena-Gyan has made since breaking into the first team of AS Rom.

He said the Ghanaian striker who made his Black Stars debut against Nigeria has shown remarkable progress and could be a big star.

Mourinho also reveals that Afena-Gyan has been trolling his teammates whose countries did not qualify for the 2022 World Cup.

“Now he has signed a new contract and gone to the Ghana national team and he is having fun with the other guys who are not going to the World Cup. These things are changing and its nice,” he said.