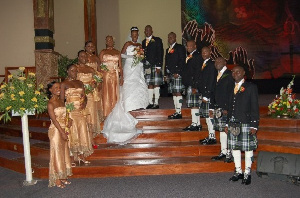 After Paul Adom-Otchere’s criticism of Togbe Afede XIV, the Agbogbomefia of the Asogli State, President of Asogli Traditional Area, some individuals who feel that the journalist was disrespectful to the traditional ruler brought out evidence of how he [Togbe Afede] has helped him [Adom-Otchere] in the past.

Photos of Adom-Otchere’s wedding and a BMW 7 series vehicle that he has used for the wedding went viral on social media with an inscription that Paul Adom-Otchere is ungrateful to Togbe Afede.

Attached to the wedding photos was an indication that the Agbogbomefia of the Asogli State, President of Asogli Traditional area also paid the school fees of the broadcaster while at the Ghana School of Law, Makola.

Reacting to the claims on his TV show, Paul Adom-Otchere admitted that Togbe Afede’s BMW 7 series was part of the vehicles he had used for his wedding but it was just for two hours.

He explained, “when I was doing my wedding, I was a director at Citi FM – we had set it up, I was doing Good Evening Ghana, I was already successful – Togbe Afede was a great friend of mine.

“I was talking to Togbe Afede about this wedding. I told him that Kofi Amoah is giving me his car, BMW 7 series, for the wedding. This wedding, I had about 14 cars, two of them were mine and the rest were given to me by people. When I said I was going to get married, people blessed me; I was favoured.

“I said that Togbe, Kofi Amoah is giving me his BMW 7 series – Kofi Amoah’s car and Togbe’s car were exactly the same – so, I said I need your car, so, that when the thing opens, the two BMWs will come then the Mercedes will follow…I just wanted to show off. My car was Mercedes…,” he narrated on his show.

On the issue of Togbe Afede paying his Law School fees, Adom-Otchere narrated that he had a conversation with Togbe, who was a good friend that he was now reading law at Makola and Togbe asked his assistant, a lady to do a cheque for him to pay off some of his fees.

“On the day that the money was ready, the lady called me and said, your cheque is ready. [I asked what cheque] and she said the money that Togbe said we should organise for your school fees. So, I said cheque de3 how, me I want cash. So, I went to Togbe and said, the lady said the thing is cash ooo; he laughed and he was considering it but the lady said they can’t do cash…”

Adom-Otchere noted that the reason why he needed the cash was that at the time, his fees have been paid but because Togbe had promised to pay part of it, he delivered on his promise.

“What is the point about this?” Paul Adom-Otchere quizzed.