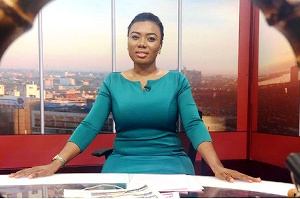 Journalist Bridget Otoo has berated the IGP for his attack on the British High Commissioner to Ghana over comments she made regarding the arrest of Convener of the #FixTheCountry Movement, Oliver Barker-Vormawor.

According to Otoo, the Inspector General of Police (IGP), George Akuffo Dampare, attacked Harriet Thompson, in a letter he wrote because he did not understand the comment the British envoy made in a tweet she shared about Barker-Vormawor arrest.

The journalist explained that Thompson was only quoting a headline in a news publication which the IGP misconstrued to mean that she was saying that Barker-Vormawor had been arrested “again”.

“@GhPoliceService looks like your IGP failed English, yet wants to play English with the BHC. The story said “again” she only quoted the article! All the pages you wrote because you lacked understanding,” portions of the tweet shared by the journalist on May 31, 2022 read.

The British High Commissioner, Harriet Thompson, in a tweet shared on May 17, bemoaned the arrest of Barker-Vormawor who was arrested for a road traffic offense, saying that she was interested in the outcome of the convener’s arrest.

Responding to the High Commissioner’s statement, Inspector General of Police (IGP) George Akufo Dampare, in a letter to the diplomat, said her tweet was made from a prejudiced or unapprised position.

“Ordinarily, the Ghana Police Service would not have responded to comments such as yours, obviously made from either a biased or uninformed position. However, we have learnt from previous, painful experiences that it has not been helpful to ignore such misguided, unwarranted, and biased comments intended to tarnish the reputation of the Ghana Police Service and that of our Country,” portions of the letter read.

Tags because ENGLISH LETTER LONG THIS UNDERSTAND wrote you

Previous Nurses, midwives paying between GHS15K and GHS20K for postings – RNMAG president
Next I am going through hard times – Cwesi Oteng finally admits